I just had a great idea for an app.  I call it Creepy Stalker Shot.  It's a camera app that lets you take pictures without other people realizing you're taking pictures.  It superimposes a faint outline of whatever you're taking a picture of on top of something innocuous like an email or a web page or texts.  That way you can still frame your shot successfully, but people around you don't know that you're being a creepy stalker. 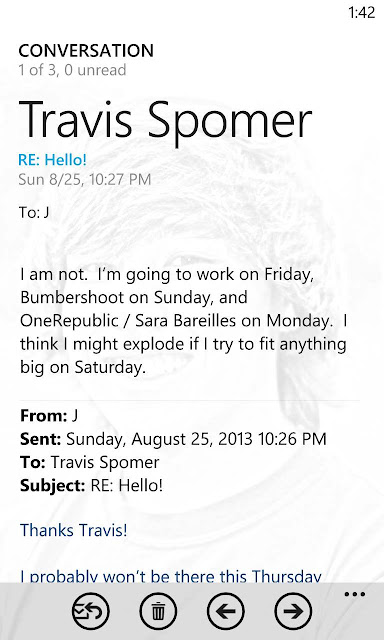 If you steal my idea please at least make a version for Windows Phone.

When I was young, I wrote a lot of stories.  Most of them were some sort of adventure in which I or someone like me was the star.  I would sit in front of a computer or a pad of paper and write them, and Mrs. Campbell would periodically check my spelling and grammar or, rarely, offer suggestions.  One such suggestion was that I should adjust the following lyrics from a song that a coven of witches were singing in one of my stories:

...ripping and raping,
killing and boiling in oil!

I do not envy anyone who has to explain to a ten-year-old that "raping" does not mean "whipping with a flail or similar torture device," which was my understanding at the time.

For most of the time I've been alive, I've been a fan of the Might and Magic game series.  Might and Magic III in 1991 was the second game I ever purchased, and it was exciting and life-changing for introducing me to role-playing games: a new type of experience that I wasn't unfamiliar with and instantly became one of my favorite pastimes, like they have for many a young nerd.  1991 was a time in which one could use the word "splendor" to refer to Might and Magic III's 256-color, 320x200 graphics.  (My cell phone has 1,436% more pixels, and displays a lot more colors.  My monitor has 6,300% more pixels.)

The last Might and Magic game was IX in 2002.  It was rushed as the company that had bought the studio tried to stave off bankruptcy, and the series died off then.  The brand name was purchased by Ubisoft, who threw away the campy characters and worlds and storylines of the Might and Magic games and started anew, but they never produced another Might and Magic role-playing game.  (Admittedly, the games they've produced under that brand name have all been fun.)

Until this year.  Ubisoft has a small team finally making a sequel, Might and Magic X Legacy.  It's old-school in every way except the graphics, forgetting most every gameplay innovation of the past almost-two-decades.  There's something oddly charming about a game so retro that you can only turn in 90 degree angles and can't look up and down and the world stops moving when you're not walking forward.  And I'm certainly intrigued.  But I'm not sure why.  It's being made by a completely new studio, with nobody who worked on the original games, and oversight by a company who completely threw away most of everything Might and Magic but the name when they bought the brand.

It's fan fiction, basically.  If someone bought the rights to George R. R. Martin's A Song of Ice and Fire series and wrote another Game of Thrones sequel, would it really be a Game of Thrones sequel?  There would be outrage at the thought of new fiction being produced without the input of the original author but released under the same "brand."  When a sequel to Donnie Darko was released with no involvement from the original writer and director, everyone assumed it would be horrible, avoided it, and from the look of the reviews they were right.  But brands changing hands seems to happen all the time in games, and most of the time nobody seems to notice or care.

Well okay sure, people notice sometimes.  Sometimes not until after the fact.  Diablo III had a rocky start and did not cater to the super-hardcore crowd as well as Diablo II did, and internet trolls vigorously proclaimed that the game was horrible and not a real Diablo game because the lead designer and most of the team were new to the Diablo world.  And while I think the game is stupendous in most ways, they may be right that it's not a "real" Diablo game.  Games don't generally have single writers that one can point to as being wholly responsible like one generally can for a book or a movie; most seem to be like a TV show where there are several writers that work together.

I'm going to buy Might and Magic X Legacy.  Part of the strength of a brand, creative or otherwise, is that it's an informal agreement.  The company who owns that brand sells you a product, and you trust that it is of a high quality because you have prior experience with the company and brand.  The insurance of this is the brand itself—if BMW started releasing unreliable, low-quality cars, the value of their brand would diminish.  And nobody knows who was the design director or technical overseer for their model of car; it's solely the brand that matters, not the people.  But if every car company started trading their brands around and assigning new teams to each project with that brand, the power of car brands would start to diminish.

Or... maybe it wouldn't.  Now that happens all the time with games, and brands are still supremely powerful, and brands can coast on the successes of old games for a long time.  I buy games all the time because they're the latest in a series so I "know" they'll be good.  But realistically a lot of the time I'm buying them for that brand promise, not because I have any idea who's involved in the writing and design and direction of the game.  (Ubisoft has effectively purchased my loyalties.)  I only know a couple game designers by name, and that's actually a little saddening to me, especially since I intend to produce my own game someday.  And I don't have a brand name behind me.
at 1:34 AM No comments:

Glad we could get that cleared up

For a while now I've been trying to decide on the least sexy euphemisms for sex that I've heard in a song.  I've narrowed it down to:

J Cole—Can't Get Enough
"get up in the guts"

Dev—In the Dark
"open me up and do some surgery"

So congratulations Dev, you have produced the least sexy euphemism for sex ever.
at 5:57 PM No comments: