For those of you who are curious what I've been working on lately, our team recently completed the new version of OneNote, for Windows 8 and Windows RT mobile devices like the Surface.  Being a generally organized person, I've been a user and fan of OneNote since the first version, so it worked out pretty well for me.  I built the notebook organization features and all of the UI that appears to the left of your page except the More Notebooks list. 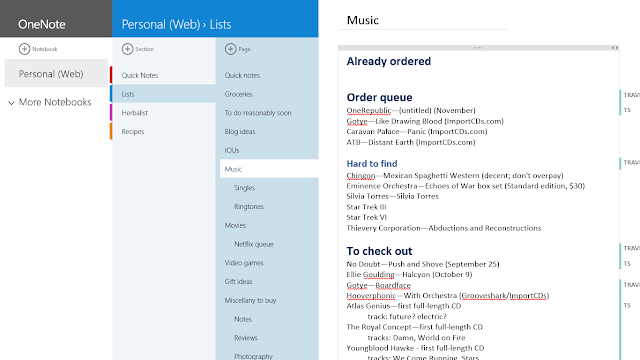 You can slide it in and out with a flick of your finger.  It's pretty fun.  I did the visuals and animations and functionality for that collapsible left portion of the app, and also worked with the XAML team in Windows to help define how some things will work for future developers.  So that's what I've been up to.

If you have Windows 8 or Windows RT, you can get the OneNote app for free.  All of your notes synchronize automatically between your tablet, phone, desktop PCs, and laptops, on pretty much every platform, so if you're already using OneNote and SkyDrive, everything will sync automatically, and if you're not, then you can download the other free OneNote apps for your iPhone or whatever.
at 4:46 PM