Facebook decided to give me a $50 advertising credit, so I used it to run this ad in September: 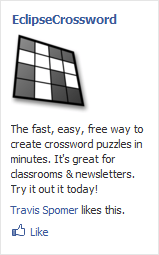 The total campaign cost about $46 (so free after my credit). In that time, the ad was shown 172,423 times, received 42 clicks, giving a response rate of 0.024%. Facebook ads work on a bidding system where you offer to pay up to a certain amount per click, and the ads that offer to pay more get shown more often. I offered up to $1.50, and on average they charged me $1.08 per click. (As an experiment, I'm going to try offering only 20 cents per click and see if the ad gets shown at all.) Then, once you get up to your daily budget (I set a whopping $7), they stop showing your ad until the next day, and then people who bid less than you start having their ads shown more often.

They let you target the ad to pretty much whoever you want. I chose to target only English-speaking women in the US between ages 30 and 60 who have at least a bachelor's degree and have "high school teacher," "middle school teacher," "teaching," "youth group," or "youth ministry" listed on their profiles, because based on the emails I receive, those are the people who use my product. After a day I decided to remove the gender restriction.

Overall it's a pretty neat little system. I don't have any prior experience in advertising, but Facebook gave me more than I expected and it was all really easy to understand. What I don't know is how terrible of a response rate 0.024% is. I mean, obviously, that seems really low. I know people barely ever click ads, but still, 1 out of every 4,000 people seems ridiculous. I don't know if I targeted the ad poorly, or if it's just not visually striking or appealing, or what.

The one takeaway was that if I really were paying $1.08 per click, I'd have to charge significantly more than that just to break even on my ad if this were for profit. If I assumed that 1 in 10 people who clicked the ad actually bought something, which still seems generous, I'd have to charge $11 to even break even on advertising, and (just as a reference) depending on who you ask, the average cost of a successful iPhone app these days is more like $4, and the developer gets like $2.50 out of that. Looking at those numbers, I don't see how a "little guy" making a small, simple product can really profit from Facebook ads. Experimenting with a really low per-click bid may change my perspective.*

Did it give a precise meaning of "shown 172,423 times"? If unique people, then that is fairly abysmal. But otherwise (pageviews or something), maybe not so bad....