Jason and I tend to talk about characteristics that we find attractive in people rather often.  One thing that I've been pondering recently is that one of the most important characteristics to me is a person's expressiveness—how effective they are at communicating their emotions simply by moving their eyes and cheeks and lips.  I simply tend to enjoy the company of people who have expressive faces much more than others.  This isn't quite the same as how cheery someone is; a person can be annoyed or exhibit dry, deadpan wit (another quality I admire greatly) and still have an expressive face: for example, I find Michael Bluth from Arrested Development (Jason Bateman) to be extremely likeable in that even when he's frustrated and annoyed (which is most of the show), his face is very communicative. 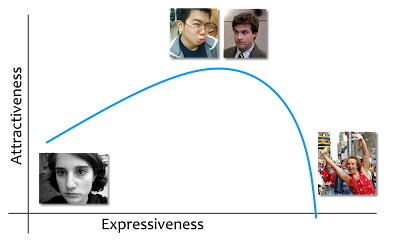 There's a point where one can be too flamboyantly expressive, and I find that to be extremely unpleasant.  I think that it's primarily because at a certain point the expressions lose their authenticity.  It's likely similar to the uncanny valley phenomenon, where people respond well to increasingly lifelike depictions of things, but at a certain point of near-life (prosthetic hands, corpses, not-quite-realistic 3D simulations of humans), people are repulsed.  Similarly, at some point, it becomes evident that the emotions being expressed are not genuine.  It is painfully difficult for me to imagine that someone as ridiculously bubbly as Richard Simmons is not just trying to put on a show.  At some level, perhaps it feels like dishonesty, and it causes me to avoid that person.

Perhaps it's a desirable characteristic to me because it's something I aspire to.  I feel like I'm rather unskilled at picking up on apparently-obvious emotional and social cues, and I try to be better about providing those cues myself, though I don't think I always do a good job at it.  People used to tell me that they thought I was depressed all the time because I usually have a blank look on my face.  This always annoyed me, because I'm a very happy person and have a very positive outlook on live, even though I tend to be pessimistic or at least realistic in my expectations of things, which is a conflict that confuses people and is a topic for another day. I don't get that much anymore, so maybe I've gotten better.

So a way that you can become more likable and attractive to me is to make faces.  Make your face look silly if you're feeling silly, or sad if you're looking sad.  People with constantly changing faces intrigue me, but you don't have to look like a cartoon.  In most of my favorite portrait photos that I've taken of people, the subject is not visibly happy or sad, but still has an interesting, intriguing look on their face.

I don't mean "attractiveness" simply in the sexual sense, though certainly if you're already my type, your facial expressions can really make a difference in how I perceive you.  Facial expressions can amplify all sorts of positive aspects—cuteness, wit, and good ol'-fashioned sexiness.  They can make intelligent people seem smarter.  They make me want to talk to you and learn more about what you're thinking.
at 5:00 PM