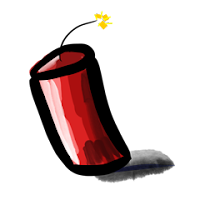 Well, I'm off for a week with the family in Nebraska. Should be interesting. And hot—oh so hot. But at least air conditioning is standard in every house in Nebraska. It never even occurred to me before I moved to the Seattle area that this was not the case everywhere. Every year it gets hot in the summer, and every year everyone seems very surprised that it's hot that summer.

I haven't been back in a year and a half now, and I'm fairly certain that Mom's going crazy with anticipation. (That's a lot of pressure, you know—the quality of this visit is the lynchpin of my mother's sanity.) If you recall, I had planned to return for Christmas last year but was stuck in Redmond due to a snowstorm. I chose a replacement flight over the July 4 weekend because I particularly miss setting off explosive and incendiary devices* in honor of our great nation's birth, and for the most part, fireworks are not legal here.

(* I am typing this post in the airport. Hopefully they do not read this post at the TSA security checkpoint.)

The Fourth was always one of my favorite holidays. Sure, fireworks are fun, but I think that there's more to it than that. It's a holiday that, in Lincoln at least, practically demands that the family get together for a collective fun activity: blowing things up. Everyone can participate if they want.

In contrast, Christmas is more about the gifts and the meal and spending time with long-lost relatives. Not that there's anything wrong with that, but it's an event designed around family togetherness. The Fourth of July brings family togetherness as sort of a bonus, but the real focus is on hot, bright, and shiny things that burn your hands. It's a collaborative amusement that you can't have any other time of the year. I think that those two aspects—the group activity part and the time restriction part—are what make the Fourth so special to me.

Or maybe I just like fire more than I'm willing to let on. Either way, tomorrow I get to "light my money on fire" as my skeptical mother always says, and it's been half a decade since the last time I did. I can't wait.

As a kid, my sources of income were quite limited, given that but I'd still manage to save up for months and months and have fifty bucks or so to spend on fireworks. My grandfather would usually chip in a twenty for each of my brother and me, which was always a really big deal. We'd budget things out and make sure that we got exactly what we wanted. The Fourth only came once a year, and there was no money to waste (unless you're like my mom and any money spent on fireworks is a waste).

The Fourth is one of my dad's favorite holidays too. I decided that a perfect Father's Day gift for him would be a fireworks shopping spree. Admittedly, it sounds more like I just forgot to get him something and I'm pulling something out of my butt a couple of weeks late, but in reality (I swear) I hand-picked this gift after weeks of thought, and I was sure to tell him that his present was coming with me this time. Hopefully he'll enjoy lighting someone else's money on fire just as much as his own.
at 2:21 PM

Agreed. After spending two years in New York, where there are no fireworks tents, I am very much looking forward to lighting off my own this year.