While we're on the subject of Women in European History, I have one other story about that class to tell. The final project in the class, which was a very large portion of our grade, was completely open-ended. We were supposed to put together something that combined everything we'd learned in an unusual and creative way. I spent a very long time trying to come up with something clever, and it didn't come to me until like a week or two before it was due. I decided to put together an owner's manual for... a wife.

One recurring theme in the class was how at the time period we were studying, women had few rights and were basically property. So, this seemed to fit. I actually wasn't sure what her sense of humor was, so I took a huge gamble on this. If I recall, my roommate thought I was nuts; my project idea was pretty offensive. But, I couldn't think of anything better, so I went for it. I wrote page after page of instructions on how to operate a newly-acquired wife, including tips on education (don't do it!), sex, proper beating techniques, and even troubleshooting, such as instructions on how to tell if she is a witch. I didn't bother with much in the way of facts or historical references; I just made it offensive, based on stuff we had been taught throughout the semester. I was sure that given how my essay tests had been obliterated by my lack of precise dates, this project was going to be a disaster, but I still hadn't been able to think of anything better, and the deadline was looming.

Finally, the day came when we were to hand in our projects—finals day. What we weren't told is that our final was to present the project; there was no test. Crap. Not only do I have to hand my professor this terribly offensive booklet about wife ownership, but now I have to present it in front of a class of budding feminists. This is not good.

We went in order of volunteering, and eventually it got to the guys and the few girls who didn't ever volunteer; I was one of the last couple to go up. I was pretty nervous. Normally I'm not too bad when I have to speak in front of people, but this was different. My project was designed to be offensive. But I did it. I went up there, and calmly presented my horrible project.

The looks on peoples' faces were not at all encouraging. I could see rage building in a few people, shock in others, and dumbfoundedness in others. No one was smiling. No one was laughing. I was getting really scared at this point. But then I skipped to one of the highlights of my manual, and while some of the class began to look horrified, Professor Levin's face filled with delight. She liked it. She actually liked that I had the balls to get up in front of the room and present my offensive project. She adored that I found passages from the King James version of the Bible and twisted them around beyond recognition to support beating women and treating them as property. She totally got the point that I was trying to make—being over-the-top to show just how ridiculous things used to be. I ended up getting a 100% on that project that I put surprisingly little effort into, and it was the only reason I was even within striking distance of the A that I got that my test scores didn't really deserve.

Here's an example of perhaps the most awful thing to ever give me a good grade in a class:

Beating instructions – arms and legs
...To beat your WIFE’s arm or leg, curl your fingers into a fist formation, and then press your fist rapidly into the arm or leg. Again, the more force you use, the more effective the beating will be. For interesting variations, try beating your wife’s arms or legs with both hands at once, at varying angles and speeds. You can also use this technique to beat your WIFE’s face, though additional caution is recommended in this area. Continue these beating procedures until the level of correction desired has been delivered. Remember, not only can beating your WIFE allow you to fully personalize it to fit your needs, but it can also be pleasurable and relieve stress. 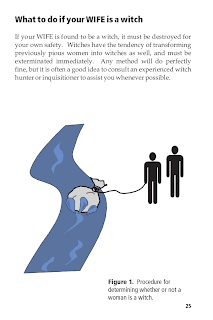 Update: Here's my original WIFE Owner's Manual (PDF) for download. Please note that it is organized for double-sided printing, not reading, so you'll have to jump around to read it in order.

Do you still have that manual? I'd love to see it.

Hahaha... that's awesome. I am amazed that no one started laughing in your class though.

Toward the end of my presentation, they did. Once the professor laughed, the cue had been given and a few people started to chuckle.