I know a lot of people are unhappy, but I'm very glad that it's relatively cool and cloudy around here today. Perfect day-off weather.

Anyway, I had a couple weird dreams last night. In one of them, I was riding around in a wheeled boat with two helicopter blade assemblies. It was about the size of a 15-passenger van, brightly painted, and pretty ridiculous-looking. That dream didn't really go anywhere. At some point in our journey we got to an intersection of dozens and dozens of interlocking train tracks that spanned for roughly four square city blocks or so. It was almost entirely train tracks, and there were no traffic lights, lines painted, or anything else to tell people where to drive, so it was just a mess of cars wandering around, all apparently hoping that they wouldn't get trapped in there the next time a train came to destroy them. We were presumably the safest people there, given that our boatcopter could likely fly away from an oncoming train.

We eventually reached a large elevator that was the entrance to an unknown building. It was not explained why we were there, but apparently we needed to enter it... with the boatcopter. The boatcopter was too large to fit inside, so we stopped and started to disassemble it. We started by taking down the helicopter blades one-by-one and carrying them down the elevator. The dream ended fairly abruptly there, and I never figured out what the point of it all was.

The second dream was very short. I was talking with a few people in someone's living room, and one woman left to go check on her newborn baby. She screamed, and we ran to see what was going on. The baby had stopped breathing. She became hysterical, and then began to accuse us of feeding her baby things to try to kill it. She screamed some more, and the dream ended.

So, that one's a downer.

In the final dream, I was in a large, mostly empty building that roughly resembled the layout of the homeowner's association clubhouse I own 5.3% of, but it was worn down and unfinished, like a barn. The floor was just sand, and the furniture was simple wooden benches. We were having a board meeting or something like that, but I wasn't paying attention to anything anyone was saying. Everyone brought their cats to the meeting, and I was just watching and playing with the cats. (Since I'm allergic, I don't have cats of my own, but I do enjoy borrowing the cats of others for short periods of time.) Most of the cats were black, but there was one adorable white kitten that seemed to like me.

As I was playing around with it, ignoring the meeting, it thrust its head into the sand like an ostrich. It was pretty cute. It got its head stuck and wiggled around a bit. I prepared to rescue it if it looked like it wasn't going to be able to get out. After a few moments, it started to dig itself in further with its claws, until it was just a tail. And then, abruptly, the tail disappeared under the sandy floor as well. A few moments later I started to see the sand move around, and then it popped its head out, letting me know it was okay. It returned to the sand and crawled around underground a little more before the dream ended.

I don't know why I had any of those dreams, but the last one might have been related to a lolcat that I saw once. I was able to find it again just now for your amusement. Here you go. 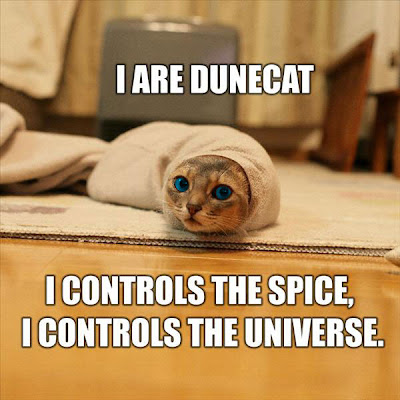 Currently listening: Death Cab for Cutie—I Will Possess Your Heart

The picture and the post made me smile while I was out in MI, which I really needed, even though I only had internet access once the whole time I was out there (and that was for 10 minutes!)