I've been playing Mass Effect (the critically-acclaimed virtual orgasmic rape simulator) recently; it's pretty fun. It's basically the same game as Neverwinter Nights and Knights of the Old Republic, but more streamlined, and a requirement that you actually aim your character's attacks instead of them being totally roll-based. The basic story formula is the same too—you start off in a training area for an hour or so until you get to the big city, where there is one big quest and lots of little quests. After that, you had off on your own.

One nice touch that I really like about the game is the flexible character generation. Oblivion is the only game I've played where you could create your own character with such a customized appearance, but most of the sliders in Oblivion went from ugly to fugly. A popular description is that Oblivion's characters all look like burn victims—it's strange considering how great the rest of the game looks. But in Mass Effect you can create a hero you wouldn't mind looking at for the length of the game. 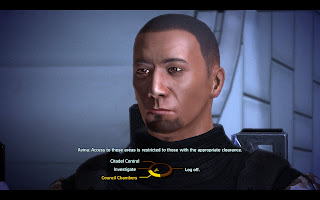 My character from Mass Effect 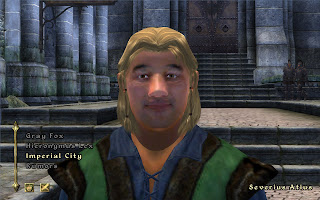 A guy in Oblivion

My character in Oblivion didn't look like a burn victim, however, she looked like she could become one if she staying in any direct sunlight for any amount of time (damn, I wish I had a picture!)

Mass Effect's choices were pretty good. Much better than a lot of games I've seen!

Well, my character in Oblivion was a catwoman, and she didn't look nearly as bad as most of the more human-like races...