I finished Crysis, the spiritual sequel to Far Cry, and I have to say... it's a pretty fantastic game. It looks gorgeous, and it plays great. The one-sentence synopsis is that you're a soldier on an island in Korea, equipped with a "nanosuit" that gives you a choice of special powers: superhuman strength, speed, or resilience, or a cloak. The nanosuit idea actually works very well in practice, because it leaves your options open. Say you're facing an enemy base. You can switch your suit to speed mode, dash in across the bridge, and hide when you get there. You can use armor mode and try to fight your way in before you're killed by snipers. Or, you can put on strength mode to give yourself incredible jumping ability, and then fall down to the rocks below, engaging your cloak before the enemy spots you, and then finding a stealthy back way in. Most of the time, you really do have a wide variety of options for how you'll tackle each situation, so the game fits a bunch of different play styles. Your suit recharges power and heals you very rapidly between battles, so there's no need to be anal about hit points, yet you're still fragile enough (especially when not in armor mode) to make you think and play smartly.

It might sound like I'm overstating the open-endedness of the game based on how poorly most games that purport to give you a choice end up implementing it, but in Crysis the levels are massive just so you can do things at your own pace in the way you want to. It's like the Oblivion of shooters. And like Oblivion, the environments are fantastic, and every once in a while make you want to stand around and gawk. The detail level is incredible; you can stand on a hill, put on your binoculars and zoom in to the maximum level, and see trees and rocks on another hill elsewhere on the island—a part of the island that you might not even have a reason to ever visit, but they put the details in anyway. There's no real limit to the draw distance, unlike most games that would start to draw "fog" to keep the framerates high. 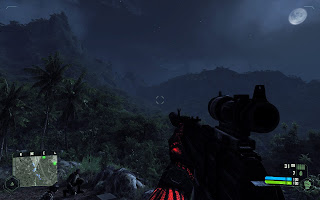 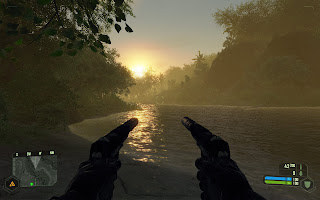 And did I mention it's gorgeous? Everything about the game's visual quality is topnotch—the models, the terrain, the textures, and the special effects. When there's electrical interference nearby or you take heavy damage, your suit's visuals begin to distort in a very believable way. You can even get blood splatter and ice crystals on your mask, and some levels have night/day transitions. Even the computer screens in-game are high-resolution, interactive, and believable, like Doom 3. It comes at a price, though—my computer's specs are pretty decent, but even my machine could only run it at medium settings. I had to turn off antialiasing to get a decent framerate in some areas. I can't imagine there even exists a computer today that would render Crysis playable at the maximum settings. (All of the screenshots in this post are at the settings I played with—medium—except with 2x antialiasing because that's how I started the game out.) 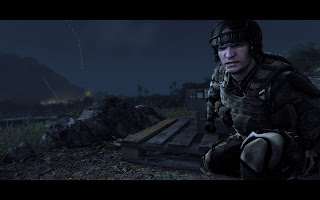 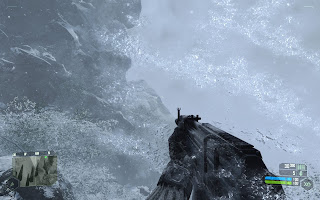 The story plays out well, though the last third of the game doesn't have the massive scope or open-ended feel of the first two-thirds. The story isn't exactly incredible, but it's not a liability, and it's presented very well, like any good blockbuster action movie.

If you're a fan of shooters and have a computer that can run it, I can wholeheartedly recommend Crysis with no reservations. It's one of the best I've ever played. Versus Gears of War and Half-Life 2 it wins out in graphics, and is right on par in gameplay. Gears of War is more visceral, Half-Life 2 has better storytelling, and Crysis is far less linear than either.
at 9:40 PM