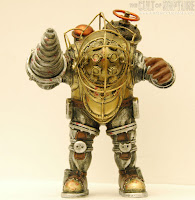 Well, I've finished BioShock. My main complaint is that after about an hour or two of the game, and your first Big Daddy (pictured) kill, you've seen almost everything that you're going to see other than the various environments and a couple of the weapons. That's not necessarily bad—Doom 3 was one of my favorite shooters, and the gameplay doesn't change much either. It doesn't help, though. The weapons are all pretty standard, but you also have what are essentially magic spells ("plasmids"), and a lot of passive enhancements ("gene tonics") that you can swap in and out. I didn't care much for the plasmids, but choosing between which tonics I used (move faster, swing my wrench harder, take better photos, fire resistance, get more health back from first aid kits, etc.) was definitely amusing. The environments are unusual for the genre, and diverse, but there is only a small handful of different types of enemies you'll encounter in the game, and that's assuming you count "guy holding a lead pipe" as a different enemy than "guy holding a machine gun." With all of the incredible hype the game got, though, I guess I was somehow expecting more from the core gameplay, or at least something new.

BioShock tells much of its story using the Doom 3 model: through diaries left behind by the previous residents. If you don't listen to these, you're missing out on most of the storyline, just like in Doom 3. (Like Doom 3, the game occasionally rewards you for paying attention to the story, as a few of the diaries contain unlocking codes for supply containers or other tips on where to find a nice surprise.) Skipping the diaries would be a shame anyway, because the storyline is really the only reason to play BioShock. It starts off a bit slow, but eventually it becomes quite intriguing. It's very different from Half-Life 2, where you feel like you're right in the story... in BioShock, you are very much an observer most of the time. I was lucky enough to not know really anything about the story going in, and I think that really helped. If you have any interest in trying the game, don't read anything about the storyline.

The "sameness" of much of the game wasn't as bad as perhaps I've made it seem. Really, the only things that really got on my nerves were listed on the box as features, and they're the "dynamic world" sort of features. It's cute to hack a security camera or turret so it comes under your control a couple times, and then after that it just gets tedious. I found myself doing this dozens or even a hundred times, and then finally I just gave up on the hacking minigame and just brute-forced everything. The game lost a lot of its uniqueness at that point, but at least it wasn't so obnoxiously frustrating. The hacking minigame is basically the same every time you play it: it's essentially just Pipe Dream. If you have always wished that your first-person shooters were broken up with about three hundred games of Pipe Dream, BioShock is the game for you. Me, there's only so much I can take before I go insane.

So yeah, I'm a bit behind the times just getting around to playing BioShock now, but it's worth picking up if you haven't. It would not get my vote for game of the year, but it's still certainly worthwhile.

At the end of the game, everything is tied up nicely, though there are some areas of the plot left (probably intentionally) vague. They're planning a prequel, though, which has me a little scared...

Your complaints with the game are probably the reason I have never gone back and finished it. I pretty much lost interest after you find out what is with Andrew Ryan and the other guy. And seeing that I have never played Doom 3 or the Half Life series - I really don't have much to compare BioShock to.

I think you lost interest because you lose interest in every game you play before you finish it.

I know what you mean. I really enjoyed Bioshock (finished it a long time ago), but I didn't really think it was that different from a normal shooter. The storyline was really good and had depth, the visuals were great, the atmosphere was perfect, but the "unique" elements that the game was supposed to have just eluded me. Personally, I set my tonics at some point midway through the game, and never changed them again.