This weekend I finished Gears of War, and it's a pretty darned good game. It looks fantastic, the storytelling is good, characters act believably, and the system of taking cover and using it to your advantage is pretty unusual and very well-executed. You don't have to worry about your health, as you heal quickly between battles, and ammo is generally quite plentiful.

Not everything is perfect. It gets fairly repetitive by the end. On the lowest difficulty level, many opponents provide little challenge, which I'm generally fine with, except there are quite a few spots in the game where it's just "surprise! this unavoidable thing happened to you and now you're dead." I could live with that in general (Splinter Cell is practically based on moments like that), but there are no save games in Gears of War. There are only checkpoints. That's okay on a console because console gamers seem to like their games to be maddeningly stupid, but it's not okay on a PC—simply not acceptable. It's not a poor design decision; it's just broken. That said, the checkpoints in Gears of War are pretty well-placed, at least for the first two-thirds of the game or so. Checkpoints start to get further apart and awkwardly-placed toward the end. And, they're generally put before cutscenes instead of after them, which is extremely unfortunate as it really pulls you out of the game to see the same cutscene again and again. You can't skip them. There are a couple particularly challenging parts—the ones that come to mind are one part in which you're defending a mansion from enemy attacks, one where you're fighting this enormous Brumak beast (missing from the Xbox version I believe), and the final battle of the game—and for each one of those, the previous checkpoint was before a cutscene preparing for the battle. Each time an unskippable game cutscene plays for a second or subsequent time a kitten dies and Travis gets annoyed. 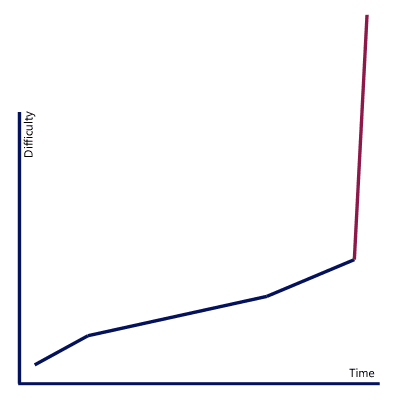 The difficulty curve of Gears of War.

Really, none of those took more than a few tries, so it wasn't the end of the world. Maybe a half-dozen attempts for the worst ones. But the final boss, General RAAM, is just ridiculous. He's far, far, far harder than anything else in the rest of the game. I abhor it when games do things like that. Yes, good work mister game, you've convinced me that I am fighting a powerful foe. I am playing you to have an enjoyable time, not to have it drilled into my head that I am fighting an enemy of unimaginable power. I get it. I got it from the cutscenes the first time. I got it from the cutscenes the twentieth time. He's a badass. Fantastic. Let me kill him so I can see the ending.

Sigh. I don't know. There's a big difference, to me, at least, between a game that presents a challenge and one that just has you die a lot for no good reason. I generally play games on nothing higher than the "medium" difficulty setting for a very good reason: to avoid unforgiving nonsense like a battle that takes about thirty tries to get right. After about twenty I looked on YouTube to see if there was anything I was missing, and just about every "strategy" video I saw explained that his script sometimes bugs out and he gets stuck in one spot, and the "strategy" is to exploit this so you can beat him. The script didn't bug out for me, so it wasn't much help.

(Also, seeing RAAM on those videos made me wonder if the PC version is harder than the console version. I read that Unreal Tournament 3, by the same team, is slowed down significantly on consoles because it was perceived to be too hard for console gamers.)

Oh well. It's over. It's still a good game worth checking out; it's just a couple specific parts that are frustrating, and if you're the sort of person who I stereotype as a "console gamer," I'm sure you'll think it's just fine. The story is amusing enough, the graphics are beautiful, the sounds and music are perfect, and the skirmishes are engaging. It's just sad, because with savegames and a couple retuned fights, it could have been a 10. As it stands... it's not.
at 12:38 AM

Well, I tend to be one of those "console gamers" - and I get massively annoyed by not having the ability to save a game whenever I want to. The worst game for this was the original Resident Evil, which made you have to find these stupid typewriter ribbons to be able to save the game - which there were a limited amount of them, and they ate up slots in your inventory, which wasn't that big (think 10-14 slots max!)

I enjoyed Gears of War. I don't think it's the greatest game out there - but I had a good time. Though, I am willing to admit that my gaming experience was different because I was playing it co-op - which I am sure made some fights a lot easier. And having to rewatch the same cut scenes is annoying! At least most consoles will let you skip them.

Yeah, I hear that Gears is much better with a partner, and the final battle would have been much better with one instead of a computer-controlled corpse since he died in a couple seconds every time.

I've only played Gears with a partner and I think it'd be pretty annoying without one. That ending battle, on the hardest difficulty, is super ridiculous. Like, you think it's hard on not the hardest level...up it and give it a try. Very frustrating.