I know a bunch of people who have become pretty obsessed with Xbox achievement points. I have yet to get sucked in. I have a very few points myself, mostly from playing Viva Piñata on the PC, which also gives Xbox credit. In addition to the Xbox achievements, I've also got Steam achivements for playing The Orange Box, and Hellgate: London achivements. I was thinking... the game I've been playing the longest is, of course, World of Warcraft, which doesn't have achievements. But, it has similar things... just no total numeric score. In WoW, the main achivement you go for is to get quality weapons, armor, and accessories. Generally, the highest-quality and most powerful items also have the best graphics. Also, armor in the game comes in color-coordinated sets, so after you've played long enough and have collected many individual pieces, you can have a stylish and coherent look instead of just collecting random things like in many games.

There are other things you can do to distinguish yourself. Actually, I like WoW's system much better than achivement points, because most of the things you can achieve in WoW have in-game consequences, either visual, functional, or both. Season 2 of the gladiatorial arena championship just ended on Tuesday, and the members of the top team in each bracket get the title "Merciless Gladiator" prepended to their name, and the top few teams get special dragons to ride. People who have played a long time and have earned the trust of various in-game factions are sometimes given new mounts as rewards, such as my netherdrake, or even small pets to follow you around, like my sporebat. People who have found a guild of very dedicated people to practice for months to be able to defeat Illidan (remember him from Warcraft 3?) can wield his legendary and immediately recognizable weapons.

Some of these things (none of the things that I've achieved) are rare enough that you can go weeks or months without ever seeing someone who has done them.... maybe one person in tens of thousands of players. I've, for example, never seen someone with one of Illidan's weapons. But, even if you can't be one of those people, you can at least get some of the easier achievements like a sporebat pet of your own. Occasionally I'll be walking around in the game and people will stop me and ask about my things, because they've never seen them before. And that's kind of fun.

So really, I am in no way above or immune to in-game achievements like I'd originally hoped. I'm just as hopelessly addicted as the rest of the world. My achievements just come in a different form. 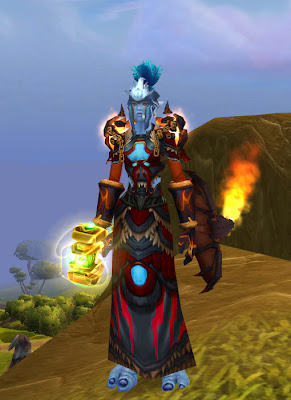 Often, the more powerful you are, the sexier you become.
at 12:49 AM

Thought I'd try something new.