[Despite how it may seem, this is really not a World of Warcraft post. It's a post about batteries.] 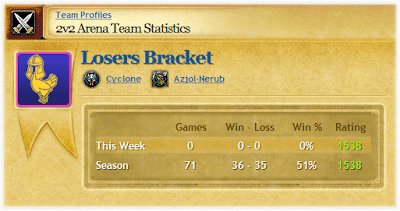 Well, I'd resisted it for a while, but I've finally given up and begun to accept that voice chat in games is the wave of the future. (Cue dramatic music.) Marc and I have been participating in the worldwide World of Warcraft 2v2 gladiatorial arena tournament (I'd use the word "competing," but I wouldn't want to give you the wrong impression), in which teams of two players square off against other teams of two players in intense fights to the death. Things happen very quickly, so you have to react very quickly, and when you're already using all of your fingers, stopping to type a message is not productive. So, for a while now, we've been using voice chat through AIM to coordinate our play. Now I can quickly blurt out

"I just see a mage, so one stealther; he's undead so other must be rogue or druid; burn mage"

It's definitely improved our play. Anyway, I promised that this is not a World of Warcraft post. Voice chat in games is here to stay whether I want to hear the voices of the fifteen-year-old nerd playing the undead rogue in my group or not. (Hint: I do not.) So, I decided to game in luxury and buy myself a new lapel microphone, like you might see on someone being interviewed on TV, or someone presenting at a conference. I hate wearing a headset, but this thing just clips onto my shirt, and it's very comfortable. Plus, my mildly unpleasant voice comes through crystal-clear on this thing, so when the day comes when I reveal my voice to people in-game whom I don't already know in real life, they'll hear every irritating word like I'm in the room with them. It was a great use of $25.

The only drawback is that unlike a headset, this thing takes a button battery. Not wanting myself to be in the middle of a killing session when my battery runs out and I have no replacement, I looked into getting a replacement battery to keep around. It turns out that you can get two of them for about $7 on Amazon, assuming you buy them with a couple CDs so you get free shipping. On a whim, I checked eBay, and there I found someone selling lots of 100 for $11 shipped. 11¢ per battery won out versus $3.50 per battery, so I went the eBay route. I expect that these batteries should last me for decades after I manage to destroy this microphone.

Yeah - I have to agree with you that hearing who you are playing with/against seems to be here to stay. I tend to not to like to talk when I am playing a game either, but since getting my gold account on the 360, I have had to do it on a couple occasions. Unfortunately, I find that unless it is someone I know, I hate doing it, since it confirms that I am a women (and opens me up to being hassled, harrassed, hit on, etc...)

And I have to agree with you, I don't want the 15 year old nerds either.

Hmm, my blood sugar machine uses such batteries, perhaps if they're actually the same size or whatever I can purchase some from you.