Well, I just finished up Dark Messiah of Might and Magic. Overall, it's a decent action RPG, but I can't recommend it without reservations. Let me cover a few basics...

The graphics are excellent overall. They're powered by the Half-Life 2 engine, complete with HDR effects, and things look pretty nice. Weapons look pretty cool, the enemies and architecture are detailed, and it's just nicely polished. Polygon count seems to be a little less than Half-Life 2, particularly in peoples' faces. The only real problem with the graphics is that so many of the environments are extremely dark if you have your brightness set to the suggested level. Your character can see in the dark, but it just means that you spend a third of the game in blue night vision, and the graphics are far less flattering in night vision. 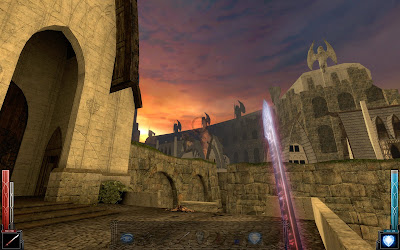 The RPG aspects are actually very well done. I wasn't so sure how well they'd be able to tack on meaningful RPG gameplay onto what is essentialy still a first-person shooter, but it fits perfectly. You don't ever get experience points, but rather skill points for completing optional and required quests. Skill points are spent on one of three trees: combat, magic, and utility/stealth. So, by the late game you can be a great warrior, a powerful sorcerer, a stealthy rogue, or some form of hybrid of the three. You'll acquire a large arsenal of weapons, rings, armor, magic items, et cetera throughout the game, and you'll put them to good use.

The combat is probably the highlight of the game, which makes sense, since it's an action game at the core. It's probably the best melee combat of any game I've played. It's more complex and rewarding than in Oblivion. You have a variety of different attacks... quick strikes, power strikes, backstabs, charges, disarming attacks, kicks, shield bashes, bows, spells, and more, and the game makes great use of the physics engine. Whereas in Half-Life 2, I felt that the physics engine mostly just served as a tech demo, in this game, throwing barrels at your opponents to knock them down so you can get away or kick 'em while they're down is strategic and interesting. If you're more observant than I am, you can also spring traps on your enemies, as each room seems to have a stone block that you can cut down with a well-aimed arrow, or heavy crates that you can release with a swing of your sword. You can kick enemies onto spikes or off of ledges. 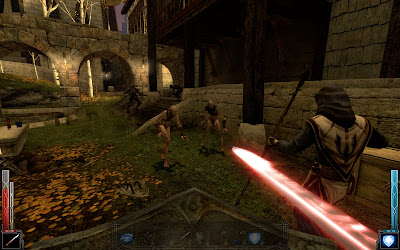 Deserving of special mention is the adrenaline bar. The faster you kill your opponents, the more adrenaline you build up. Once the bar fills, the edge of the screen gets wavy and red, and your next strike will be a guaranteed kill against anything but a boss. The best part is that when you make these attacks, the game goes all Matrix (or Max Payne) so you can see your extra-brutal adrenaline kill in sexy slow motion. Daggers are used to decapitate or disembowel, swords chop off limbs, and so on. It's always very satisfying to watch.

Not all is rosy, though. The enemies start to get pretty repetitive. The first time it's just you and a massive cyclops in a big room, it's exciting. But, I'll just go ahead and give a teensy spoiler and say that you're gonna do it about eight more times. At the beginning of the game, you might get attacked by one or two of the extremely lethal ghouls, and by the end of the game, it's eight of them, rather than too many new enemies. You're a better player with more damage and more armor class, but by halfway through or even less you've basically seen everything you're going to fight for the rest of the game. I can deal with repetitive enemies, though. I mean, I fought the same things a thousand times in Oblivion before I stopped.

The absolute worst part of this game is that it suffers from the FPS "where do I go next" syndrome far more severely than any other game I've played before. The cause of this is that, fairly early in the game (another minor spoiler) you find a magical bow that shoots arrows with ropes attached. For the rest of the game, anytime you see wooden planks or beams overhead, you can shoot them to create a rope you can climb. Unfortunately, there are many places in the game where you have to do this to continue, and when the environments are so dark, it can be very difficult to tell the difference between the useless stone ceiling and the necessary wooden beams when everything's blue in your night vision. In a good FPS like Half-Life 2 or Doom 3, I'm lost maybe 5% of the time or less. In Far Cry and the Splinter Cell games I'm lost 10 or maybe 15% of the time. In Dark Messiah at least 20% of my game time was spent backtracking and looking at the ceiling. 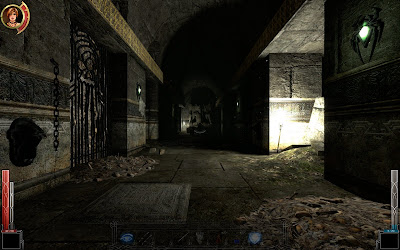 If you could somehow cut out that frustrating 20% of the game, Dark Messiah would be excellent and I'd heartily recommend it. I don't know; either require less use of the rope bow, or show little red sparkles everywhere the level designers think you need to use it. But, it's so frustrating that it really scars the game. The other annoyances about the game, like the fact that it's pretty much impossible if you don't choose the Heal spell as soon as you can learn it, or an abundance of enemies that poison you, I could deal with if I just hadn't been lost so much.

So, if you think that the whole getting-lost thing won't bother you, I definitely recommend the game. (Fans of Japanese games seem to, in my opinion, have a higher tolerance for irritating games than I do.) There's a demo available that shows you like a sixth of a level in the game. It's a huge download and doesn't last terribly long, but it gives you a good taste of how it plays.
at 11:18 PM