I decided to pick up Adobe Lightroom. I was a bit torn. It's full of awesome functionality, and the only other thing like it is Apple Aperture, which is never coming to Windows, so it's basically my only choice for this genre of pro photography workflow software. But, it's a perplexing product—Lightroom doesn't get your photos looking better than you can get with other software; it merely does things very efficiently and with style. It's almost like you're paying just to have all sorts of useful photography features you already have from your other software all integrated into one application. 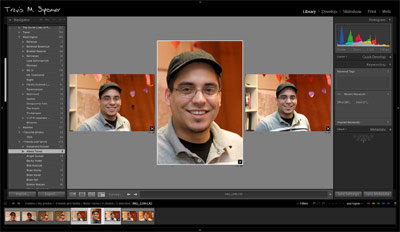 It's a pretty smooth little app. Everything's rich with finishing touches in a very Apple-like way—it's black and stylish, uses subtle animation to good effect, and there are even little things like "flourishes" at the bottoms of the dockable panes. You can rearrange your photos on a "table," see things side by side, quickly zoom into details, preview different development techniques, and so forth. And, in a very Apple and Adobe way, the UI is quirky, and there are plenty of useless customizations you can make, such as replacing the Lightroom logo with your own logo and picking a different flourish or color scheme, but yet you can't make useful customizations like rearranging the panes.

Also, in a very Adobe way, it's extremely slow. It pegs my CPU at 100% at pretty much all times just so I know it's a powerful piece of software—how thoughtful. After you install it, it will take a leisurely couple hours to rape your files, and you can't really use your computer at all during this time, because it's maxing out your hard drive and using a good chunk of your CPU cycles. That, combined with the fact that the registration wizard will fail if you paste your CD key instead of typing it manually, gives you a very poor first impression.

But, I had already used the trial for a couple weeks, and after the initial rape, it's a pretty nicely-designed little app. It's a luxury item; nobody "needs" it, and I won't get enough use out of it to justify the eventual cost, but what you're paying for is increased happiness while working with your photos, and I decided in the end that that might be worth it.

After my next photo shoot, I'm sure I'll talk about it a little more. It's been handy while triaging and developing so far, but it should really shine once I've got a couple hundred pics to sort through. It would certainly look extremely snazzy if I had a powerful laptop that I carried around so I could show proofs to clients, but I have neither the powerful laptop nor the clients.

Thanks for posting about this. I will be sure to stay away from that piece of software when working with my own photos.

Ya gotta see it, though. It looks pretty impressive once it's all going and you figure out what some of the tiny little buttons do.

Old post resurrection! Have you tried 2.0 yet? What do you think of it?

I have not. I hear it's awesome and also chock-full of bugs. I figured I'd wait until a patch or two have hit. The other thing is that I don't know if I really need the extra features; Lightroom 1.4 works very well for me, and I'm not super-excited about the new stuff.