I've spent most of today putting together a budget, deciding what kind of place I could afford, and looking at condos in the area. I've seen some nice ones and some not-so-nice ones. The nicest one in my price range (more accurately, at the absolute top of my price range) is this townhome—I guess that means that I'd get half of this thing: 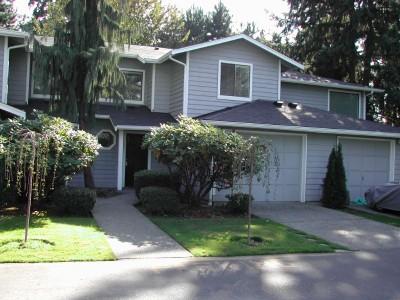 Everything about this place seemed great except the price. In fact, it was attractive enough that I'd almost have considered fast-tracking a tour and a loan and everything to see if I could get it, despite having planned to not actually move until the spring. Close to work, roomy, just renovated, no upstairs or downstairs neighbors... until I looked at the map one more time. What you can't tell from the picture is that there's a major street right behind the house. In fact, I had an apartment right up against that street as an intern, and it was hell. I couldn't get to sleep at night from the traffic. So... no. I suppose it's possible that it's not as noisy on the second floor where the bedrooms are; I was told by other people in that complex that their places weren't too bad. But I'm wary. Wary enough that I'm going to go back to waiting a few more months before getting serious again.

Thank goodness for those web-based aerial maps.
at 2:02 PM