The Puget Sound University football team took the same flight from Seattle to Denver that I did today. Fortuitous indeed that the biggest guy on the team and I were seat-buddies. As most of you know I’m quite a big guy myself, often mistaken for a wrestler or football player, though I’m manboobier than your average football player. Anyway, on two separate occasions during boarding, a player from the team saw the two of us attempting to sit next to each other in the tiny airplane seats, got a sympathetic smile, and then apologized for my misfortune.

Thus began my trek of discomfort. Both of our torsos were nearly the full width of our seats, so we had to overlap our shoulders. It’s been an hour since that flight now, and my spine still hurts from contorting my body to fill the available space as comfortably as possible. Essentially, I spent two and a half hours cuddling with the biggest guy on the football team, except that would have been far more comfortable were the Rules of Manhood to allow such a thing. I imagine that I’ll get the feeling back in my legs back just in time to board my next flight, which is running about 75 minutes late.

I’ve included this lovely diagram to help illustrate the situation: 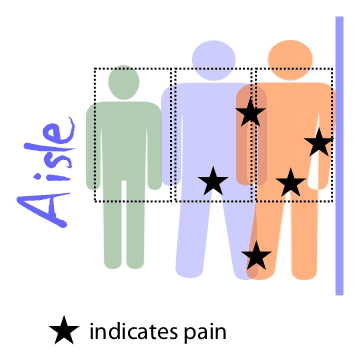 OK, I understand the shoulder, elbow, etc. pain, but why the pain in the crotches? You sure you and that linebacker weren't violating the Rules of Manhood? ;-)

-- Larry, who just stopped to consider the irony of a gay guy (me) gay-baiting a straight guy (you)

Are you the guy by the window or in the middle?

Oh yeah. I meant to add labels to my diagram. I'm the guy in the middle.

OK, the diagram makes me glad I actually went back and read the posts on your blog. It is ALMOST as hilarious as the funeral home comment card.

My goodness! Now, the only thing which would have made that flight complete would have been a baby who was behind you who screamed through the whole flight!