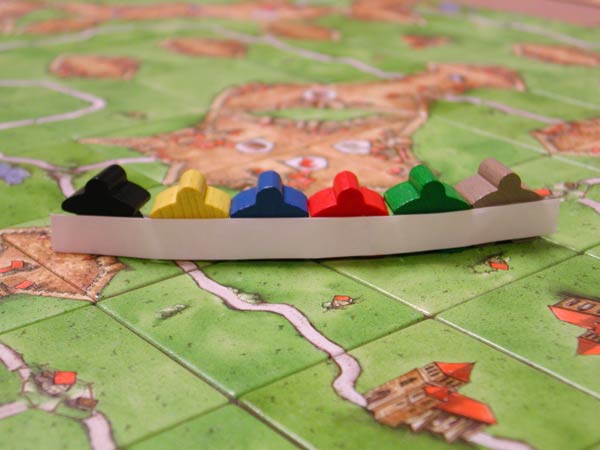 "Meeple" is a word for "token representing a player in a board game." Most notably in the game pictured, Carcassonne.

At the beginning of my junior year of college, after I had kindled a love of board games in the hearts of my friends, I thought it would be amusing to start off the year with a celebration of gaming. Needing something to post on my door, I set up this photo, which was probably the most work that I've ever put into a photo. Finding so many pieces that fit together took quite some time.

I left the colorful meeples' banner blank so different messages could be Photoshopped on in the future. There's a story behind the only message I ever used. One of the orange city pieces in my copy of The Settlers of Catan is incomplete; one could imagine that someone bit a chunk out of it. Once this was observed, a friend of mine remarked "we do not gnaw on our cit-y" in a Dr. Evil fashion, mimicing his Austin Powers line "we do not gnaw on our kit-ty." This became a catchphrase of sorts, and became the text that I added to the meeples' banner for Meeple Pride Week.
at 12:45 AM

Every time I look at it, I think the banner should read "Celebrate Meeple Diversity!"