Knights of the Old Republic II

Well, I've just finished Knights of the Old Republic II. Excellent game. The original KOTOR was good enough that it got me to finally give in to the dark side and decide I probably didn't really hate Star Wars, and this one is a worthy sequel. Essentially, it's Neverwinter Nights (3rd Edition Dungeons and Dragons), except with a Star Wars theme, a much better storyline, better graphics... and lightsabers! 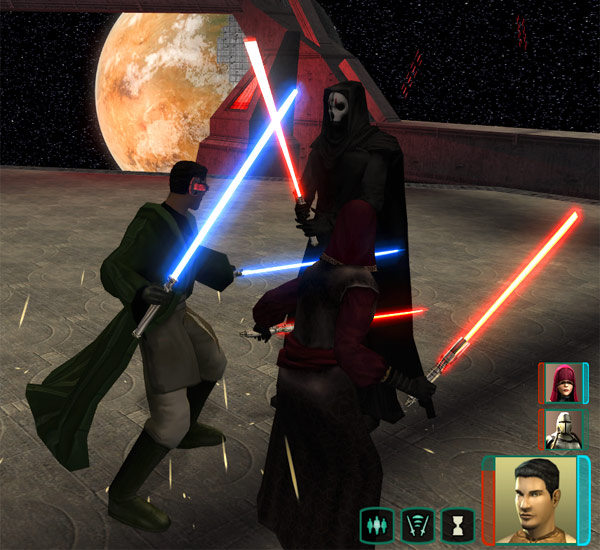 If you played the original Knights of the Old Republic, you almost certainly loved it, and if that's the case, you really need to play KOTOR II. I'm kind of sad that I waited so long to play the sequel, but it hasn't aged badly. It's an easily recommendable game to any RPG fan, as long as you don't mind losing the standard medieval fantasy atmosphere.

This second iteration of the game introduces one game element that I found quite innovative. Many times throughout the storyline, you don't play as your hero, but rather as one or more secondary characters who are generally performing side tasks to aid your primary character. While your main guy is fighting his way to the boss, he might walk through a door, and the screen fades to black. Suddenly, you're now in control of the droid that's clearing your escape route or hacking the computer systems to unlock doors for your main character. Where most games would just tell you those things were happening, KOTOR II lets you play them, and I think that's pretty cool. It helps to make the events in the storyline seem bigger—they're too big for your main character and his or her party to handle by themselves all at once. At times these little gameplay vignettes would last ten or fifteen minutes and be chained together, for a neat little epic experience crossing many different characters working together. Combined with the general addictiveness of the game, it makes it hard to play for "just an hour or two."

The graphics are an interesting mix. Parts of the game are beautifully designed, with interesting and detailed environments. Yet, some parts of the game are downright ugly, with weirdly blocky models and bland textures. Also, some areas, primarily the interiors of large buildings and ships, become very repetitive, kind of like (shudder) Halo. Some character animations are bizarrely jerky and fake, and some are extremely well done, like all of the melee combat animations—you'll see swords crossed and pressed against each other in a struggle for dominance, jumping, kicking, and a wide variety of amusingly choreographed fights. Overall, though, it's good, and there's a lot of variety in what you'll see.

The hallmark feature of Knights of the Old Republic continues in the sequel, and that's that your character starts out as a neutral alignment and slowly turns to the dark side or the light side as you make plot decisions. The original game took a twist toward the end, depending on which you chose, but in the sequel, I can imagine that the plot is very different depending on how you play your character. Though I only played as a goody-goody light side Jedi, it seems that a great deal of the storyline would be very different had I played a dark side character; considerably more than in the first game. That kind of flexibility and replayability is very cool. The people who join your side change their behavior based on how you act, and even your character's gender will change the storyline and which characters will ally themselves with your cause.

Anyway, I had a great time. You can get the game for cheap if you're an RPG fan, and it's certainly worth your money.
at 1:08 AM