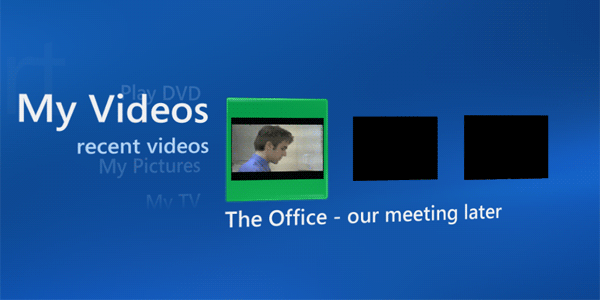 A while back on a Thursday night, the conversation topic switched to Media Center and DVRs in general. It seems that most Microsoft employees use either Microsoft's own Media Center, or the local Comcast digital DVR box. Anyway, we were talking about various Media Center features while waiting for more people to show up for games, and someone mentioned the My Videos section on the Media Center main menu. Our consensus was that it's useful for really only three things: pirated TV, pirated movies, and porn, possibly pirated. We acknowledged that it could also be used for one's own home video recordings, but we were skeptical that that many people actually had home video on their computer; certainly far fewer than people who had at least one of those other three things.

But the UI for My Videos is very silly. When you select it from the menu, it immediately shows clips from the last three things you watched so that you can immediately watch them again. We couldn't see a purpose for this. If it's a home video, and you recently watched it, why would you want to watch it again right away? If it's pirated TV, you'd want to see the next episode, not the one you just finished. Same for pirated movies—why would you rewatch the same movie immediately after? Few people do that.

So, the ability to scroll through the videos on your computer with the remote control is nice... but why does it show the last three things you watched right on the menu? I removed that menu item long ago with a hack, and just put it back to get a screenshot. The three things on there were that excellent clip from The Office, a video that you can find on the internet doing a search for "twangers and balls" (surprisingly non-pornographic) that I watched like a year ago, and a short stand-up segment named "Why Indian people can't buy from Chinese people" that I played back when I first got Media Center. Chance that I actually want to watch any of those things while scrolling through my Media Center menu: about .005%.

(I blacked them out to make the screenshot slightly more mysterious, but believe what you will. :)
at 12:21 AM