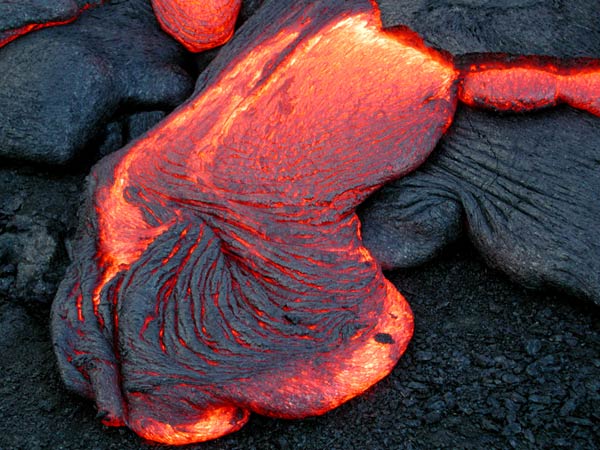 I took this photo in 2004 in Hawaii, and it's one of my all-time favorites. I got as close as I could stand to the lava, and even several feet back the heat emanating from the lava burned my face. But, I manned up and refused to let that get in the way of a cool picture. (I probably should have been more worried about damage to the camera than the discomfort.) It moved slowly... fast enough to make it nearly unbelievable that it was live, molten rock, but slow enough that I could get close and take a picture.

The sight of molten rock oozing forth from the earth just feet away from where I was standing was one of the most amazing experiences I've had on a vacation.

I often wonder how much better pictures like this would have turned out had I a better camera at the time. One of the reasons that I bought nice camera equipment is so that I'd have no excuse other than my own incompetence and lack of experience whenever a shot turned out poorly. In this case, I imagine that it would have turned out sharper, with smoother colors. But, it's still a great shot.
at 11:14 PM

What kind of camera did you take this picture with?