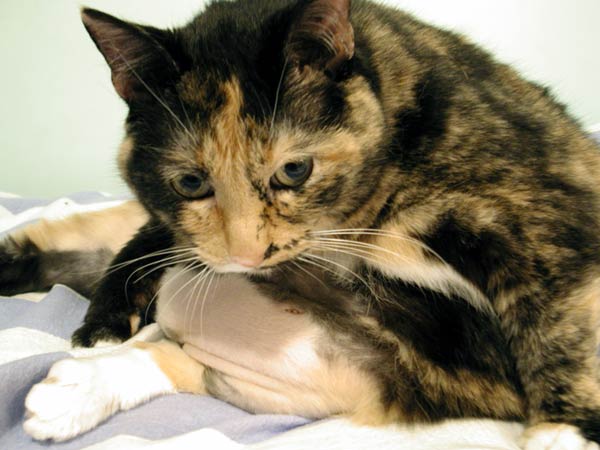 This is a fun photo of my parents' cat Kodo. She's very lazy, and despite not eating much, is quite fat. It's not a very good picture, but it amuses me. The way that I framed the photo makes it look kind of like she's stuck in a box. She sometimes likes to sit like that, with her back hunched over and her belly sticking out. There's a reason that my dad started calling her Jabba.

She's too fat to clean herself for the most part, but she spends the same amount of time cleaning herself as if she could. So, she just licks her stomach over and over, to the point that it just feels like a peach now, having removed all of the hair. Their other cat helps groom her, and she still has a nice, soft fur coat. She's a very loving animal, just... slow.

My brother named her Kodo after one of the two ferrets in the movie Beastmaster, his favorite movie at the time. Unlike that Kodo, though, this cat won't be fitting into tight spaces or doing anybody's bidding.
at 2:07 PM

"Stuck in a box" or "fitting into tight spaces" like... a Bonsai Kitten? What are you hinting at?

Man, am I pissed those animal-rights activists couldn't take a joke and that site no longer exists...