Funny Friends, the English version of an unpronounceable German game that I played a year or so ago, is out, and it's as great as I remembered it. It's the rare game that has a fun, deeply-ingrained theme, but also is a well-thought-out game in its own right. The object is simple: be the first one to complete five secret life goals before the other players. Cards that help you attain those goals are chosen from a common pool shared by everyone, and the cards are auctioned to whoever wants them most desperately. 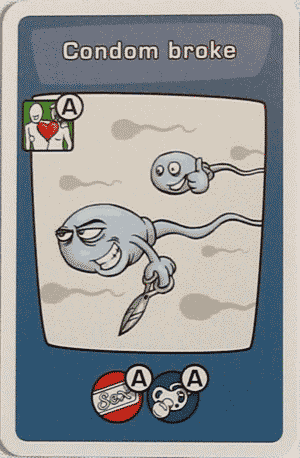 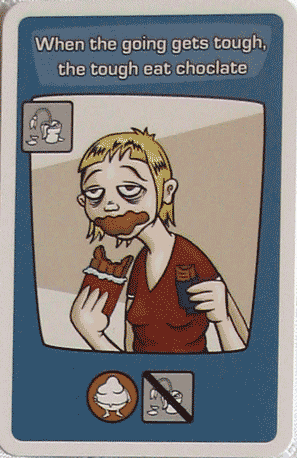 Cards used to achieve your goals: Buy "Condom Broke" to have sex and a child with the person you're dating. Or, buy "When the Going Gets Tough, the Tough Eat Chocolate" when you're miserable to cure your misery but make you fat.

That could have been a decent, though somewhat dry game on its own—a bunch of statistics and relationships between players that are tracked on a mat and altered by cards auctioned by the players. But, any game in which on my turn I'm trying to decide which other player to date and subsequently have sex with so I can break up with them on my next turn for one goal (break up with three people and then become miserable), while simultaneously trying to become addicted to cigarettes for another (take up smoking so I can quit later), all while cheating on my current lesbian girlfriend... well, that game gets a thumbs-up from me. 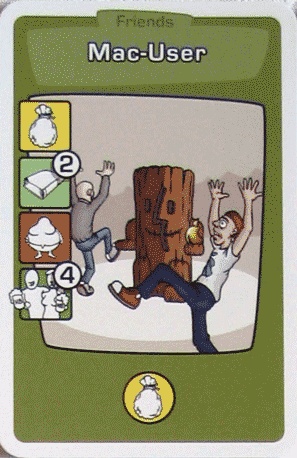 It's from two excellent designers: Friedemann Friese (Power Grid) and Marcel-André Casasola Merkle (Meuterer, Attika). But, more importantly, it's just a great game. The original German version was still a good game, but with only pictures to amuse you, it's not quite the same. Now that it's finally available in English, it's a keeper—a great game to keep around for when just the right people show up.

I really enjoy this game. I think I liked the translation of the name better into Freaky Friends - but I feel that just discribes the game better. So, I have to ask, are you going to buy a copy of this game?

Actually, I already had one on order as soon as I found out an English version was in print. It arrives Tuesday.