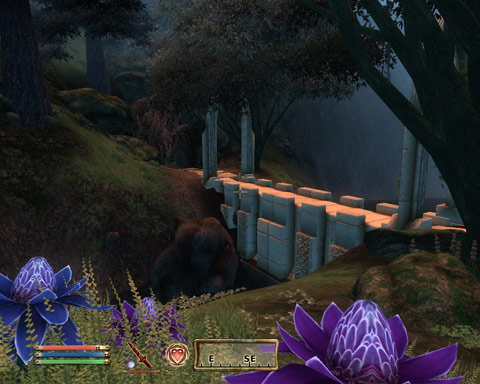 Well, I've finished Oblivion. What a great game. I put about 90 hours into it overall, and while I haven't even begun to see all the world, I've finished essentially all of the main quests, and so I think I'm done for now. It's another new classic that I'm going to remember fondly for a very long time.

There's little that I can really say about the game; it's all been said already. It deserves the hype it got, and it really does seem to have something for everyone. Just about every developer on my team has picked it up now, even the non-gamers, and they're all loving it. It's just a beautiful game, in every sense of the word, and it really embodies so many of the things that I love about the genre.

It's not without faults. It's buggy at times; I mean, I had to make a mod just to continue one of the side quest lines. The leveling system can be infuriating to newcomers. And, it has very little in the way of "cool new shiny stuff" that generally makes role-playing games a lot of fun—there's little to get you to explore the many, many dungeons not relating to any particular quest, just because the treasure you find is totally insignificant.

But there's way too much to like about the game to focus on the faults for very long. It's nothing short of a masterpiece, and the sort of game that's few and far between. I enjoyed spelunking through Ayleid ruins, the majestic Cloud Ruler Temple, stealth and trickery for the Thieves' Guild, and murder and intrigue for the Dark Brotherhood.

Now I suppose it's time to focus entirely on Heroes of Might and Magic V.
at 1:50 AM