I had such luck with last Saturday's two CDs that I decided to start on another one a couple days later, Supernature by Goldfrapp, and it is also excellent. It's my favorite of her three albums so far, but it's also not as insane and cool as her previous two, Felt Mountain and Black Cherry. If you're not familiar with Goldfrapp (this seems likely), it's a strange brand of probably-undanceable, bizarre electronic pop. Every track is great, but check out Lovely 2 C U, Ride a White Horse, and You Never Know. Good luck trying to find samples of the other songs on her insane website. 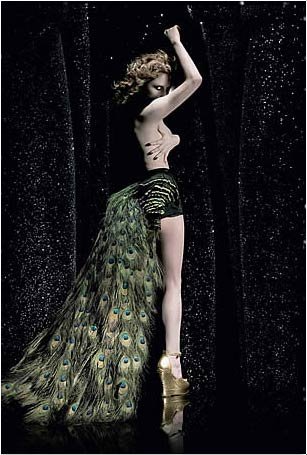 Goldfrapp, Supernature DVD edition slipcover. On the CD cover, they blacken out her wrist so it looks less like a deformed breast.


That Scissor Sisters CD that I mentioned last time is quite addictive. There are a couple tracks I don't care too much for (Tits on the Radio, Filthy/Gorgeous), but by the time I hit the end, I can't believe it's over already.
at 12:37 PM