Delerium—Archives Volume 1, and Archives Volume 2. Delerium is a personal favorite of mine. They've got a really cool sound that mixes pop, electronic music, and ambient world music. And, as with many of the bands on my playlist, ethereal female vocals.

This is not that Delerium.

Well, it's the same band. But it's not the same Delerium. Their older tracks would be best described as "industrial and moody." They're kind of like the soundtrack to American McGee's Alice, or a less-energetic Unreal soundtrack. Or, the show Unsolved Mysteries, if you're not familiar with those games. It's weird. Some of the tracks are decent, and several suck. But, each of those albums is two CDs, so out of four CDs I got my $25 worth. It's interesting to see how a band that originally made music like that makes music like this.

But, that transition didn't make sense. There's a missing link somewhere that combines the two...

From Semantic Spaces, check out Flatlands and Gateway.

For a more recent Delerium sound, check out Silence featuring Sarah McLachlan (from Karma, 1997), which is the only one that sounds anything like the older CDs I listed above, After All featuring Jaël (from Chimera, 2003), and Stopwatch Hearts featuring Emily Haines (also from Chimera), which is basically just pop.

Fredalba—Uptown Music for Downtown Kids. This is a pretty decent CD. I think it's also the only CD that I have that's by someone who's primarily known as being an actor: Eric Balfour, who is apparently on The OC, but that's not where I've seen him. Actually, I don't know where I'd seen him, but I recognized the face. 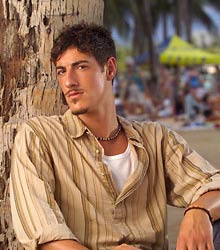 So, it turns out that that guy sings well, and the band is interesting. I don't know who I'd recommend it to, though. It's some variant of rock; maybe I'd classify it as funk. Check out Gimme More, Prepare to Reactivate, and Progression.


Finally, today, I got into the sudden mood to listen to new music while working, and I happened to get a couple new CDs in the mail on Friday, so I listened to them both.

Fischerspooner—Odyssey. I like this. It's electronic alternative rock, I'd say. Parts are a bit unpleasantly emo in a Depeche Mode kind of way, but overall it's fine. It's got a lot of interesting sounds. Watch the Never Win video and you'll have a pretty good idea of what they sound like, though much of the rest of the CD is a little less poppy, so not my fault if you hate it... Also check out Everything to Gain, and the annoyingly-titled "•" for some insane retro electronic wackiness.

Scissor Sisters—Scissor Sisters. This isn't at all the kind of music I normally listen to, and I loved my first play through. Keeping with the theme of today's post, I don't really know what genre it is. All Music Guide calls it "genre-defying" in the first line of its bio, so I guess I don't feel too bad. Fischerspooner and OutKast are both listed bands that sound similar to Scissor Sisters, which confuses the hell out of me. Their album review uses phrases like "fancy-pants disco" and "twittering glitterball beat," and somehow those seem really fitting. Not knowing really where to put it, I think I'd have to call it "disco." Anyway, it's very cool. Check out Laura, Take Your Mama, and Music Is the Victim. You can always minimize the window if the lead singer creeps you out too much.
at 5:03 PM

Eric Balfour is on Conviction, the Law & Order spinoff.

I think that I like Scissor Sisters after listening to it, but I'm afraid I won't be able to listen to them without getting those images in my head.