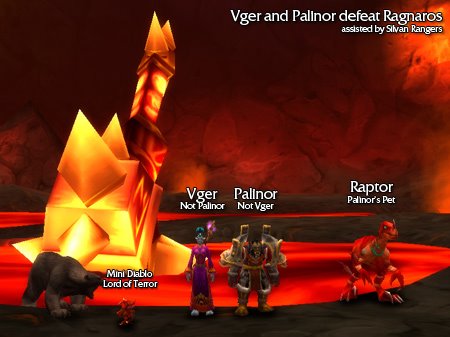 Marc and I have returned from my trip to Molten Core, and we were successful. Ragnaros was downed, and I survived through most of the fight until the Sons of Flame arrived. It was a lot of fun. I don't think I'd be too interested in being a part of the guilds that do Molten Core several nights a week for months and months on end in order to master it, but it was certainly a ton of fun this once.

For those who know the game, loot of note included the Staff of Dominance, the Ancient Petrified Leaf, one piece of the Earthfury armor set, and three pieces of the Giantstalker armor set. I would have been at two Earthfury armor pieces, but my epaulets despawned before I could loot them and the Game Master would not restore them. Extremely disappointing, but it's just a game.
at 11:00 PM