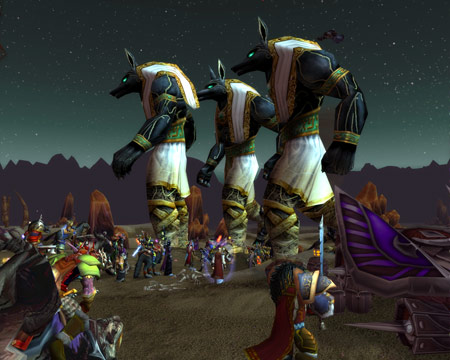 The Gates of Ahn'Qiraj opened last night on my server. It was a very cool event, never to happen again. Hundreds of players from both factions fighting side by side taking down the massive Anubisath Warbringers and the Qiraji generals, the mind control crystals popping up all over the continent, and the Colossus bugs thrashing Cenarion Hold and throwing guards around like tissue paper. The attack lasted ten hours, starting at 9:00 pm Pacific time, but after about half that, I had to call it a night. I'm sure some people stayed up until 7:00. I wonder if they got a special bonus for completing all three of the special event quests to help defeat the Colossus bugs.
at 1:58 PM