The worst cursor I can think of

That. That's the worst cursor I can think of, excepting those stupid cursor replacement packs where you get animated dinosaurs or pulsating blue crystals or other nonsense. It's the Photoshop crop cursor, and it's evil. Whoever designed it has some serious problems. You know where the hotspot of that cursor is? Right in the middle.

Here's an example. With your imaginary mouse, using that cursor, try to crop out the dialog box from this screenshot: 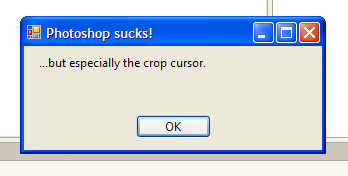 Hmmm. With a single-pixel crosshair you could probably do it right now. Let's zoom in. 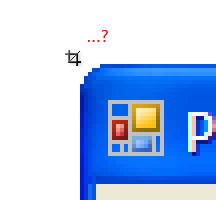 You still don't know where to put your cursor. Were you to click there and start dragging, you'd notice that you got a couple extra pixels around the border that you didn't want. So, you press escape and try again. Maybe you get it that time, maybe you don't.

If I posted about every thing about Photoshop that's unjustifiably stupid, I'd never have to post about anything else again. But this example is one that drives me particularly nuts, because I use the crop tool so much. I should really just select an area and then crop to my selection; the selection tools aren't nearly as bad.
at 1:52 PM

I wonder if you could use reshacker to change the cursor. That would be a lot of work, but could pay off if you are really annoyed by it.

YES! That's why I always have to re-adjust my crop selections in Photoshop. I just never thought about it, but it's very clear... Good analysis.

I don't think I've ever used the crop tool-proper. I just select, and then Image->Crop. Probably in part for this very reason.

I do the same as Luke. I hate that cursor.

The crop tool is great for situations where I don't need things to be pixel-perfect, like photos. I can use the size handles to adjust the crop area much easier than I could with a simple mask, and a double-click will immediately apply the crop. Since I find myself doing a lot of photo work, and crop works well for photos, I gravitate toward crop. But, I should train myself to just select and then use the crop command like Luke and I mentioned. Of course, I shouldn't have to.

I'm not defending that cursor because it does suck out loud, but just turn on Caps-Locks and you'll get a much better cross-hairs cursor. Or you could always set the cursor preferences to always use the "precise" cursor.

Whoa. Never would have thought of turning on Caps Lock to fix the cursor. What's wrong with me?