It is almost upon us 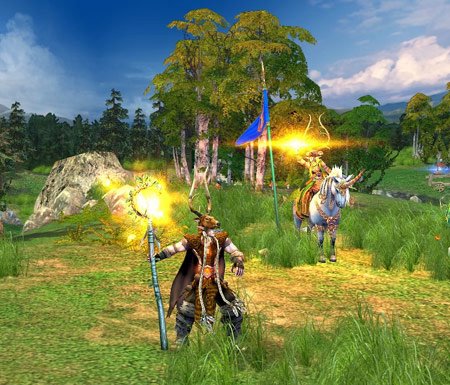 As any faithful reader already knows, I am very excited about Heroes of Might and Magic V. The return of one of my absolute favorite series of games, under new management, is just intoxicating. With the slightly delayed open beta slated to start tomorrow morning, I may finally get a small taste of what to expect. I doubt I'll play too much before it's released, since the beta is multiplayer only and I prefer single-player, and I certainly have plenty to do right now, but just a little should be enough to tide me over for a few months.

[Monday update: it's available at FilePlanet. But, subscribers only until Thursday.]

Heroes V is said to be a return to the Heroes III style of gameplay. Heroes III was an incredible game, but I don't think that Heroes IV deserved the bad rap it got. It made a lot of bold changes to a series that hadn't seen too many in a while, and ended up with something that I thought was beautiful and entertaining and awesome, though quite buggy until the final patch. I kind of look forward to the same thing from Heroes V, actually... it's being developed by a new group of people; fans of the series and turn-based strategy in general, but not the original designers nonetheless. If I'm not mistaken, something similar happened to Command & Conquer for C&C Generals, and it's my favorite in the series.
at 1:43 AM